Firefox 3 adds fuel to the death of the desktop 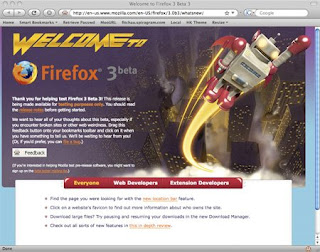 I've been playing around with the beta releases of Firefox 3, which have been available for a few months. Mozilla, the open source foundation that creates the browser, has spelt out the improvements they have made. While most users will only notice subtle differences, such as the much quicker speed at which web applications such as Google Mail work, the greater impact of Firefox 3 is the new capabilities it provides web developers.

Fundamentally what these new resources mean is that Firefox 3 will provide a way for all the applications that were once written as desktop applications to be written as web applications that can be used offline (as a desktop application would be) as well as be used online. Surmising from my previous post, in the same way Windows moved the base platform from the command prompt to the graphical user interface, it looks more and more likely that we are going to see the platform move again to the web.
Posted by Dino at Tuesday, April 15, 2008