Users almost never look at anything that looks like an advertisement, whether or not it's actually an ad. Mark Suster recently highlighted an eye tracking study found the following: 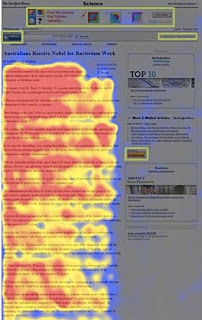 The areas where users looked the most are colored red; the yellow areas indicate fewer views, followed by the least-viewed blue areas. Gray areas didn't attract any fixations. Green boxes were drawn on top of the images after the study to highlight the advertisements.
Posted by Dino at Sunday, June 12, 2011