Steve Blank describes the phases of a bubble in an Economist debate:


One of the least understood parts of a bubble is that there are five types of participants: the Smart Money, the Shills, the Marks, the True Believers and the Promoters. Understanding the motivations of these different groups helps to make sense out of the bubble chart below. 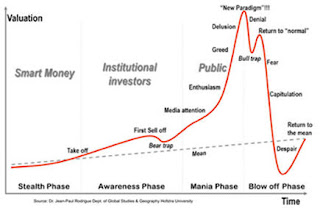 Smart Money are the prescient angel investors and venture capitalists who started investing in social networks, consumer and mobile applications and the cloud three, four or five years ago. They helped build these struggling ventures into the Facebooks, Twitters, and Zyngas before anyone else appreciated that these companies could have hundreds of millions of users with off-the-chart revenue and profits.

In a bubble, the Smart Money doubles down on their investment in the awareness phase, but—when it starts becoming a mania—the Smart Money cashes out. (Really Smart Money recognises it is a bubble, and bets against it.) They manage this all with knowledge of the game they are playing, but they do not hype it, talk about it or fan the flames. They know that others will.

The Shills are the middlemen in a bubble. They profit from the boom times. They are the mortgage brokers and real estate agents in the housing bubble, the investment bankers and technology press in the dot.com bubble. Since it is in their interest to keep the bubble going, they will tell you that housing always goes up, that these bonds are guaranteed by a big bank, and that this tech stock is worth its opening price. All the stories peddled by Shills have, at their heart, why "it is a new age" and why "all the old ways of measuring value are obsolete". And why "you will be an idiot if you do not jump in and reap the rewards and cash out".

The Marks are your neighbours or parents or grandparents. They are not domain experts. They know nothing about real estate, financial markets or tech stocks, but they do not want to miss the "investment opportunity of a lifetime". They hear reassurance from the Shills and take their advice at face value, never asking or questioning the Shills' financial incentives to sell you this house/mortgage/tech stock. They see others making extraordinary amounts of money at the start of the mania—"just buy a condo or two and you can sell them in six months". What no one tells the Marks is that, as they are buying, the Smart Money and institutional investors are quietly pulling out and selling their assets.

The True Believers do not financially participate in the bubble like the Marks (for lack of assets, timidity, or time) but they would if they could. They have no rational evidence to believe, but for them it is a "faith-based" belief. By their numbers, they give comfort to the Marks around them.

The Promoters are the ones who keep the bubbles inflated even when they know that the asset exceeds its fundamental value by a large margin. While Shills have no credibility, Promoters have "brand-name" credibility that makes the Marks trust them. What makes the Promoters' role egregious is that they are a small subset of the Smart Money. They loudly tell the Marks and the Shills that everything is just fine, enticing them to buy into the bubble, as the Promoters are liquidating their own positions.