The last of the moguls 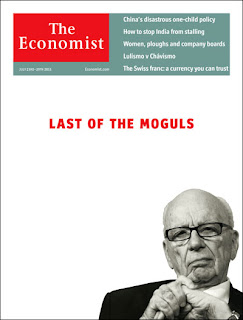 The media business is changing. Our media content - which shaped our thoughts and opinions - was once controlled by a few media moguls. Today, the Internet has smashed this control to a vast array of Internet players.

As today's issue of The Economist points out:


The media industry used to be full of powerful families. London had the Rothermeres; Los Angeles had the Chandlers. The Hollywood studios began as family outfits. But a combination of regulation and technology has broken media monopolies. Beginning in 1948 America’s courts smashed the old, vertically integrated studios. The internet is undermining the dominance of mass media and handing power to start-ups, bloggers and companies like Google and Yahoo! for whom news is a peripheral business, not a consuming passion.

This is just a small after-thought on a more comprehensive Economist report on the future of news:


THREE hundred years ago news travelled by word of mouth or letter, and circulated in taverns and coffee houses in the form of pamphlets, newsletters and broadsides. “The Coffee houses particularly are very commodious for a free Conversation, and for reading at an easie Rate all manner of printed News,” noted one observer. Everything changed in 1833 when the first mass-audience newspaper, the New York Sun, pioneered the use of advertising to reduce the cost of news, thus giving advertisers access to a wider audience. At the time of the launch America’s bestselling paper sold just 4,500 copies a day; the Sun, with its steam press, soon reached 15,000. The penny press, followed by radio and television, turned news from a two-way conversation into a one-way broadcast, with a relatively small number of firms controlling the media.

Now, as our special report explains, the news industry is returning to something closer to the coffee house. The internet is making news more participatory, social, diverse and partisan, reviving the discursive ethos of the era before mass media. That will have profound effects on society and politics.