In the two years I've been away from London, the city has developed a flourishing digital hub - "Tech City". A map has been created to highlight the growth of startups in the hub. 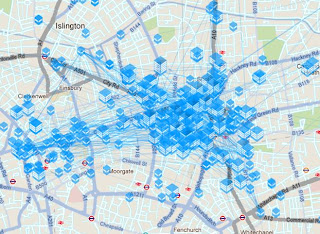 More from the BBC:

The UK Prime Minister has unveiled an interactive map of East London's technology cluster, revealing more than 600 firms in the area.

The Tech City map highlights the expansion of Old Street's "silicon roundabout". By comparison there were around 200 tech firms based there last year.

The government said it was acting to support the area's success.