A glimpse of a slick, professional team 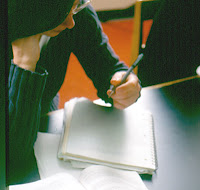 I consider note taking to be a key behaviour of members of a world class service management desk. Note taking while investigating issues creates an audit trail that easily gives the engineer working on an issue, as well as others in the team, a trace of how something has been investigated. It allows others to be included on the investigation, allowing them to make contributions.

Without the key behaviour of note taking, the service management desk becomes prone to common problems that frustrate stakeholders of less well managed service desks:
I am currently building a service desk team, with many members of the team inherited from elsewhere. Getting their adoption of the note taking practise has been slow to happen, but today I've started to see a glimpse of the kind of slick, professional team we are working towards: able to pass issues between engineers easily, with clear visibility to anyone interested of the technical investigation done and confidence in the capability of the team rather than individuals.

Specifically, the glimpse that I "saw" was that
We still have some way to go for stories like this being true of every incident that we deal with. However, I think it is encouraging that we are now starting to the note taking behaviour being adopted and the benefits of this.
Posted by Dino at Thursday, September 13, 2007