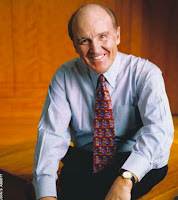 In his book titled Winning, Jack Welch dedicates a chapter to Change, subtitling it Mountains Do Move. Welch distills his wisdom for bringing about change into four practises:

1. Attach every change to a clear purpose or goal. Change for change's sake is stupid and enervating. People need to understand in their heads and hearts the need for change. This is easiest when the reason for change is obvious, for example bad media headlines. When it is not obvious, it becomes necessary to collect data and relentlessly communicate the rationale for change.

2. Hire and promote only true believers and get-on-with-it types. To find these change agents, Welch points out to look for their characteristics: being brash, high-energy and more than a little paranoid about the future. They tend to be curious and forward looking, asking questions that start with the phrase "Why don't we...". They often invent their own change initiatives or ask to lead them.

3. Ferret out and get rid of resisters, even if their performance is satisfactory. Welch believes it is necessary to get the right people by your side and to get rid of those resisting change. These resistors usually lower the morale of those who support change and foster an underground resistance. They waste their own time in a company where they don't share in the vision - they should be encouraged to find one where they do. Even if they have a specific skill-set, they should not be held on to: they only get more die hard and their followers more entrenched over time.

4. Look at car wrecks.
Make the most of opportunities, even capitalising on other people's unpredictable disasters. It is possible to acquire resources cheaply from bankruptcies, for example.

These practises, though they may seem simplistic, do make sense. As well as point 1, behavioural change in the team should be the priority. From point 2, the person in my team who is embracing change the most is of the type Jack describes - always asking questions about improvements. Point 3 confirms a suspicion I have that if the person who is the biggest resister to change stays on my team, I am not likely to accomplish the change I need. Point 4 is definitely something that I will bear in mind.
Posted by Dino at Sunday, September 09, 2007