Television, but not as we know it. 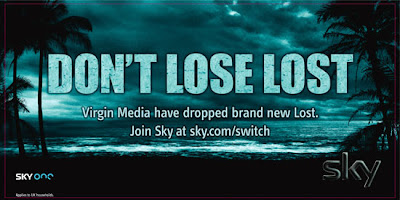 This billboard ad gives a taste of the competition between Sky and Virgin Media. ©.
In the distant past, all television in the UK came through a terrestrial TV receiver. The big competition was between the BBC, iTV and Channel 4 – the big TV channel operators. Yet now, in this day and age, these same broadcasters are forming tight-knit partnerships that mean they will share resources ranging from technology to news reporting facilities. These same broadcasters are also the major partners that constitute Freeview, the venture that owns the digital terrestrial television platform. Has the basis for competition shifted? Rather competing TV channels, are we entering a world of competing TV platforms?

In the same way that the UK has a dominant satellite television operator in BSkyB and a dominant cable television operator in Virgin Media, are we now seeing the emergence of a single dominant terrestrial television operator? The groundwork for such a merger is already in place. Following analogue switchoff, the terrestrial television platform will be entirely digital and entirely dominated by Freeview. The Freeview partnership consists of the BBC, iTV, Channel 4 as well as Sky and Crown Castle. Already the BBC, iTV and BT are working on developing the Freeview platform to exploit integration with the internet. This integration will make the Freeview platform competitive with BSkyB's satellite platform and Virgin Media's cable plaform.

The next five years promise to be interesting for the television landscape in the UK. Long gone are the days of competition on the single terrestrial platform between the BBC, iTV and Channel 4. The value chain for television broadcasting is changing. The competitive pressure in the chain is moving from the channels to the television platforms.