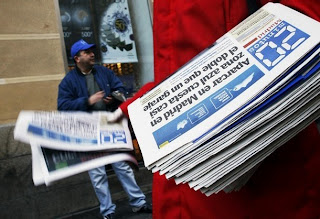 Free newspapers are distributed outside a metro station in central Madrid. ©
A week does not seem to go by in which the New York Times does not begrudge the demise of newspapers, with the most recent discussion debating the effect of micopayments on journalism. In the meanwhile, I can not help but notice the new newspapers that are emerging from the woodwork. I can spot at least three different types of new newspaper.

Newspapers That Selling Something
The premise of the Free business model is that when certain types of goods become widely available, you need to start looking at what else there is in the offering that becomes scarce and chargeable. ClearAdmit and similar admissions consultants show how publishing MBA news markets their MBA admissions consulting services. ClearAdmit maintains a blog updated at least once a day. The blog covers news from the MBA schools - sometimes from the schools' own press releases, but also from direct sources, such as interviews with schools admissions staff. For ClearAdmit, and other similar consultants, maintaining such a blog attracts regular visitors to their site more effectively than an informational website would. The blog also allows ClearAdmit to demonstrate a level of credibility for the admissions consulting services that they sell. ClearAdmit is not unique in publishing news to sell other things. The blogs at harvardbusiness.org are intended to attract readers to long form articles in the printed Harvard Business Review and even longer form text in the form of Harvard Business School Publishing's books. Tescos Magazine consists of lifesyle articles with suggestions in side panels of related products that can be bought.

Hyper-local new sites that feature user contributed stories.
TribLocal and MyCape are hyper-local sites that allow local residents to submit their own stories. The promise of sites such as these is substanitally low overheads - there is no need for a print edition or even paid journalists. Even the New York Times seems to agree that there could be promise in this model: on Monday 2nd March they are launching their own hyperlocal blogs with contributions open to local residents. An obvious revenue generator for such hyper-local publications is hyper-local advertising. If you are the biggest grocery store in Brooklyn, you are not going to advertise on the internet using Google Adwords (the monoploy internet advertising platform). If you were to do so, your ad would be displayed to any person randomly searching for Brooklyn or grocery related subjects on the internet. The conversion rate for ads displayed to actual goods sold would be low. However, on a web site where the vast number of readers are from Brooklyn, such as a hyper-local news site, the grocery store can be sure that an ad's coversion rate is as high as it can be. Hyper-local news sites open up internet advertising to small to medium sized location based businesses. [Update: CUNY's involvement in NY Time's hyperlocal blogs].

Free Printed Newspapers
With the availability of free news on the Internet, London has seen the arrival of free printed publications. Metro started in 1999, but in recent years has been joined by The London Paper, London Lite and Sport, an infrequent sports magazine. As though from a Clayton Christensen case study, this "free newspaper" disruption even has a different distribution mechanism to the incumbant paid-for newspapers: these papers are typically handed out at London Underground train stations. The rise of free newspapers has been phenomenal and not a local phenomenon. In Madrid, free newspapers are more popular than paid newspapers. The Guardian describes the financials for a mainstream newspaper to go free, and indeed even suggests that most mainstream newspapers should go free so that they can drive traffic to the newspaper's online site and fully embrace the internet phenomenon. A study into free newspapers describes the differences between distribution driven (i.e. free) newspapers and content driven (i.e. paid) newspapers. The study suggests that free "distribution driven" papers are targetting the specific needs of the people in the distribution channel, i.e. the needs of commuters - typically a younger audience in search of short articles to be read on the go. These free newspapers are successful in running off a predominantly advertising only revenue model.