The story of a catastrophe. 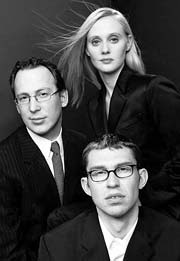 The founders of boo.com. Top to bottom: Kajsa Leander, Patrik Hedelin and Ernst Malmsten. ©
In my social circle, one of my friends - Ivan - has earned himself the reputation of making bankrupt boo.com, a fashion retailer of the dot com era that grew to 400 staff and burnt through $135million of investment money. Of course he is not really responsible for the bankruptcy, but this local urban myth encouraged me enough to read Boo Hoo, the story of boo.com.

What Ivan did to earn that reputation.
In April 2000, Ivan started raving about boo.com, a new online clothes retailer. He said they were offering £20 money-off gift vouchers on the first purchase every new customer made. boo.com identified a new customer by whether the email address of the customer was already on their system. If you strolled around Ivan's apartment, you would have seen wall-to-wall boo.com delivery boxes. This guy had registered dozens of web email addresses and ordered dozens of goods as a "first customer" on the site. All these goods were priced just a little over £20, perhaps £23 or £22. When boo.com went bankrupt in May of that year, everyone joked that Ivan had sent them bankrupt. So given the nascent stages of my own start-up adventure and this previous encounter with boo.com, when I saw that one of the founders had written a book about the experience, I felt compelled to have a read.

It's about who you know.
Reading the book, I realised that a lot of who the success the founders of boo.com had was through people they knew. Patrik Hedelin, an investment banker and the third founder, introduced them to JP Morgan, a world renowned bank that would seek out investment money for them. Patrick also got Sacks Arms, a world renowned law firm, to work with them. Ernst Malmsten, the lead entrepreneur and CEO, also always seemed to have people who he could call on for advice. These included Salty, an ex-JP Morgan adviser who moved on to a VC firm. Salty advised them on matters such as handling Arab investors. Another adviser was a contact at PWC who has experience in firing senior executives. The experts that Malmsten had to help in him in many scenarios seemed plentiful.

People management.
Malmsten spent a significant amount of time worrying about Patrik Hedelin, the CFO. Hedelin's lack of ability in shaping up the finance department and building a solid financial model for the company kept Malmsten occupied through large parts of the adventure. Later, the CTO, Steve Bennett would give Malmsten further grief. Once that was resolved, even the replacement CFO and even then later the Head of HR would give Malmsten personnel issues to deal with. These seemed to be a constant need to performance manage and replace someone or other.

The bottom line.
There was also no bootstrapping at the company. The boo.com were based in London and made frequent expensive visits to New York, where they stay at the Soho Grand. They hired ex-BCG consultants to open offices around the world. The company expanded very, very fast - burning money. When boo.com realized that the revenue from sales would not sustain them, they had to cull staff - but their overheads were far too much still.

In conclusion...
Boo Hoo is a great book. It would be rare to see that kind of catastrophe happen again. There are a lot of lessons in how to get quite far in building a significant company, although there are systematic failures - such as the lack of attention to the bottom line. On a personal note, I now realize that my friend Ivan had all those clothes subsidized by investors ranging from Arabs to Benetton. How strange it is how money flows.