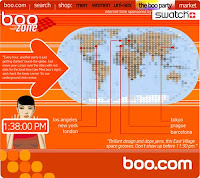 boo.com's prototype website created a "wow" experience. You could even model the clothes on a mannequin fitting your body measurements and twirl it in 3D. © & ©
Get everyone excited. Is this the key skill of an entrepreneur? One of my main takeaways from Boo Hoo, a book I recently posted about, is that it's important to get everyone excited, and then for this excitement to infect other people - at least enough for them to part with large sums of their money.

Although there are a lot of setbacks that Ernst Malmsten, the lead entrepreneur and author of the book, as well as the other founders experienced - I could not help but notice the excitement that they generated. While at first most investors and suppliers were interested, once a few became excited, other soon followed. So what helped create this excitement?

Experience. Ernst Malmsten and one of the other founders, Kajsa Leander, had a previously started a successful online book retailer called bokus.com and then sold it. This was crucial to persuading JP Morgan that they could make boo.com a success. The success of their earlier venture meant that (at the time) they were one of the few entrepreneurs with Internet experience. Who better to make boo.com a reality?

Timing. JP Morgan, feeling a little late to the dot com investment party, could not help but be enthralled by the opportunity of boo.com when it was presented to them. Large IPOs were becoming common place for dot coms. For JP Morgan, and some of the suppliers that came on board, the opportunity came at the right time: they were already a bit hungry.

Buzz. The first press article publicizing boo.com appeared in Womans Wear Daily, a trade magazine read by fashion suppliers. After the article was published, suppliers such as Benetton got excited and became ready to come on board. This first article also got them into more exclusive fashion magazines, such as Vogue. Interestingly, Womans Wear Daily did not write the article to publicize boo.com. They were interested in the story from the angle of LVMH investing in boo.com, rather than the boo.com venture itself. Still, this was enough expose boo.com to the world to get others excited it.

A "WOW" experience. The key reason that boo.com got further in making online e-tailing a reality, comparative to other similar clothes retailing startups at the time, is because they got the suppliers on board. Suppliers were wary of the Internet and in some senses wanted to protect the effect it would have on the bricks and mortar retailers they sold to. However, once one of the suppliers began to let boo.com sell their goods, other followed. Some investors and some suppliers were easier to persuade to come on board once other investors and suppliers were already on board. They simply did not want to take the lead. A key persuaders was a fantastic prototype site that made everyone that looked at it go "wow" and call over others to share the experience.

Belief. The founders were also persistent in trying again and again to get the support of investors and suppliers. They all had unwavering belief in the concept and were determined to go incredible lengths to get the support they needed to make it happen. Patrik Hedelin, the third founder, for example continued to woo Benetton as an investor long after many had given up hope.