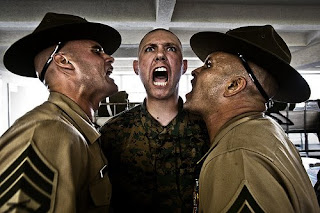 CIM has been compared to an army bootcamp, where you are "broken down" and your behaviours retrained to survive in new environments. At business school, this new environment seems to consist of frantic team bonding, late night drinking and then struggling through classes afterwards. ©

I felt myself gasping and clutching my seat. It was the first day of business school. The 2nd year leaders of our 72 person first year group had just uttered some words to unleash hell, "you need to come up with five cheerable chants among you; you guys can organise yourselves to do this". The sudden vacuum in leadership among 72 A-types opened the doors to a sudden gigantic wave of chaos. Rather than repeat Shobit's summary of CIM, Kellogg's orientation progam (official details here), I'll provide some anecdotes of my experiences.

Who could have thought that so many blatantly idiotic activities could inspire so much passion and energy? From a battle to produce the best chants, to treasure-hunt style races and "the name game", every 72-ish person "section" that the class of 2011 is broken down into competes during CIM to win various competitions. One girl called it genius - "we're forced to bond with each other super-quickly!"... Personally, I've been awed by how many people want to lead something - anything: even competitions as weird and meaningless as these. Perhaps more interesting is the joint realisation by everyone that chaos is a lose-lose situation for all. Eventually, people learned to rally around the people who spoke with the most common sense and enthusiasm. The cry of another person, "we can't all be leaders", captured the essence of the situation.

Between the chaotic team bonding, first year Kellogg students also partake in a pre-term class: Leadership in Organisations. Each class is a massive learning itself, requiring a lot of reflection to really appreciate. For example, a recent class broke up into small teams of 3 that paired up with other teams of 3 to negotiate. One of the teams got completely whitewashed! Perhaps most amazing was that the team that got whitewashed thought that they had a good deal until they came back to the classroom and found the options each of the teams really had to negotiate with. One of the negotiators on the rival team was revealed to be an expert: start negotiating from a really ambitious target price: the wider the gap between your target price and your "reserve price" (your lowest price), the more room you have to negotiate with. The professor summed it up: what matters is how much negotiation you do - the more the other party feels like they've had to work for it, the better they will feel - even if really they got a bad deal (.... because they don't know it - they think they've done great because they worked so hard for it). This also means that if someone offers you a really great initial price, you should not accept it - if you do, they'll think "damn, I could have got a better price". Instead, making them work for an even better deal makes them feel they got a good deal and you get an even better deal.

The last component of CIM, beyond crazy competitions and classes, is the socialising. There are Kellogg people out every night, though only the hard-core are out every single night. In a town in which everyone lives four blocks from each other, the same five or six bars become the places that everyone is at. Socialising becomes very easy. Doing so in wacky costumes makes socialising even easier. I was out one night, when my glittering green wig caught the attention of not only every passer-by, but also the locals in one of the bars that Kellogg students frequent. After much banter, it materialised that one of the old gentleman at the bar, a little removed from the social chatter elsewhere among Kellogg students, was a the owner of a chain of restaurants around Chicago. Who'd have thought networking could be this easy?