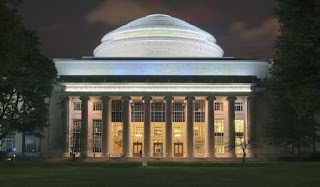 MIT hosted and ran the sales MBA competition ©.
It has been a whirlwind ride over the last few weeks. I flew into Boston on the weekend of the 17th October to participate in the MBA Sales Competitionrun by MIT. The competition pits contestants from different business schools in sales role plays. The final two rounds in Boston consisted of a 1-on-1 individual role play and a group role-play, where the representatives from each school sold something together. Unfortunately, my 100% score in the preliminary phone-based cold call round, which got me there, counted for nought.

My individual 1-on-1 roleplay was probably best described as "a bit of a disaster". The roleplay centered around selling private wealth management services. I should have known a request for a for a "verbal pitch" actually meant powerpoint. The important lesson for me was that it is often better to give the illusion of over-preparedness, than to actually be over-prepared. The Group round, during which each school sold SAP to a potential customer, went slightly better.

The organisation of the event was quite impressive, and I was surprised to hear how strong MIT Sloan's offerings are in the sales space. Sales is not something most people would associate with the school, but their sales club is the second biggest on campus, they run a conference, offer training from external partners and off course run this competition. MIT Sloan certainly seems to be building a brand for sales.

Overall, it was a good event and I'm glad to have been lucky enough to participate. The logistics would have been a nightmare to organise, with entrants from almost a dozen schools, but the MIT students did a fantastic job getting the event together. Nevertheless, the Kellogg kids might not have won the sales competition, but I'm sure we've sold some of the Sloanies on the idea of on dropping out and applying for Kellogg class of '12 ;-p.