Talking to people about the business. 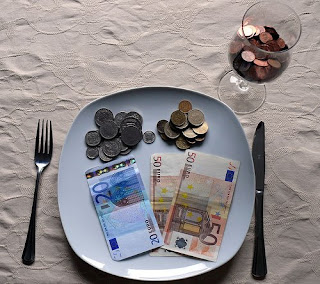 Lunching with me can be an investment opportunity of sorts. ©
The psychological process of commitment is interesting. For me, it starts with a thought. I think it through a lot. I then come to a decision as to whether or not to commit. I will start talking about the commitment with people I know, to gather their views. When talking to them, I'll often tell people that it's just something I'm thinking about. In reality, I will be beavering away in the background to move it ahead. I'll tend to be far more committed than they know.

At the start of the year, I started publicly talking to people outside my social circles about my plan to intertwine starting a business with completing an MBA. The best part of talking to people has been hearing their interpretation of what they think my ideas are. Sometimes their interpretation is better. When I speak to people and they ask questions, I realise how much I have actually thought things through. I'm slogging away at writing a business plan at the moment, so I find these questions useful.

When I was at DAK in February, I even ran my thoughts past a few people there. These not only included students and admits, but also people ranging from those at the technology incubator (tied to Northwestern University) to Farley Center for Entrepreneurship. I left those conversations with two distinct impressions - (1) that entrepreneurship at Northwestern is not centered at Kellogg and (2) that there are people around the university that do have the expertise to help me take my ideas forward.

Since then, back in the UK I have been getting in touch with people who might be interested in partnering with me to build a prototype of the idea. Most of these people are friends from university, now bona fide software developers. I'd meet them for lunch, one day after the next. After about the third person, I got into the flow of giving a pitch. However, the sell has been a lot harder than I imagined. This is partly because everyone I speak to is in the UK and well, I'm leaving the UK for Kellogg in August. "Can I have a job in 2 years, when you finish?" said one. "I have a better idea... no I'm not telling you what it is" said another. Throwing in talk of a programming scholarship they could apply to at Northwestern has not enticed them either. Perhaps I need to improve my sales skills? As unlikely as it would seem, the person showing most enthusiasm is someone I met again at a house party - "yeah! re-igniting the face of news", he says.

While the business plan is a work in progress, I've carved out a small section from it as a slide deck to describe the concept. Hopefully, this will make it easier to convey to people what my thoughts are, as I start talking to more and more people about my business proposition.